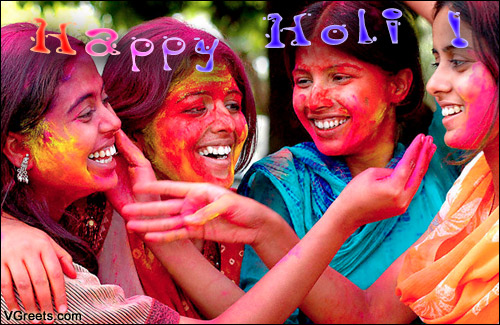 On March 17th, many Americans, and especially those of Irish heritage, will be puttin’ on the green for St. Patrick’s Day.  But in India, March 17th will be a day to burst out in a rainbow of many colors, as is traditional during the Hindu festival of Holi.  This “Festival of Colors” has been described as “the world’s happiest event”  as it breathes an air of joy and merriment. People “bury their hatchets” with a warm embrace and throw their worries to the wind. Every nook and corner presents a colorful sight. Young and old alike are covered with colors (red, green, yellow, blue, black and silver). People are seen singing, dancing and throwing colors on each other.

Holi welcomes the beginning of the new season, spring. In 17th century literature, it was identified as a festival that celebrated agriculture, commemorated good spring harvests and the fertile land. Hindus believe it is a time of enjoying spring's abundant colours and saying farewell to winter. Holi festivities mark the beginning of new year to many Hindus, as well as a justification to reset and renew ruptured relationships, end conflicts and accumulated emotional impurities from past.

Celebrated with unstoppable energy, Holi in India transcends all people-created biases and differences of caste and gender. The fervor of Holi festival takes into its grip everyone, especially the youngsters. Reflecting the heightened spirit of the Holi festivities, a strong sense of revelry is overly obvious on this day. People express their emotions and demonstrate their affections and friendliness with complete freedom. This openness is apparent in Holi celebrations such as home get-togethers, Holi evening parties and card-game night-outs.

Holi is observed with special importance in the North of India. It solemnizes the love of Radha and Krishna, one of the many Divine couples in Hinduism. The spraying of colored powders recalls the love sport of Lord Krishna and His devotees.

Email ThisBlogThis!Share to TwitterShare to FacebookShare to Pinterest
Labels: Festivals