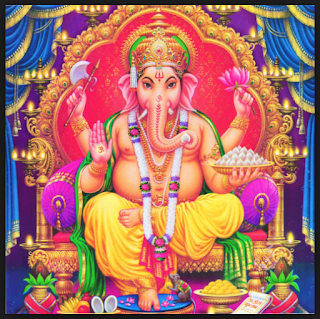 As we stand poised on the threshold of a new year, we can all take a deep breath, exhale all that the past year has brought us, and breathe in all the possibility that awaits us in 2017.
It is customary in the Hindu/yogic tradition to invoke Ganesha, the Lord of beginnings, of success, and the remover of obstacles, at the start of any new endeavor. He is also honored at the beginning of rituals and ceremonies, and kirtan (Hindu call and response devotional chanting) typically begins with a chant to Ganesha.

Ganesha is one of the most beloved Hindu gods. He is also known by the name Ganapati, as well as many other epithets. He is the child of Shiva and Parvati (who were the very first yogis). He has an elephant head with huge ears, and a pot-bellied body of a human. He is often depicted riding on a mouse. Volumes have been written about the rich symbolism of the images, and there are many colorful stories about how he came to have an elephant’s head. If you have an interest in delving into the mythology, here are a few sites you can visit:

Ganesha is also associated with the Muladhara Chakra, the energy center at the base of the spine. It is said that he guards the gate of the Kundalini (spiritual energy) that lies coiled there.

Here is a mantra that is typically chanted to call upon the power of Ganesha (Ganapati) at the beginning of a new undertaking:

OM: The primordial sound of the universe.
GAM: the bija, or “seed” mantra of Ganesha (pronounced somewhat like the English word “gum”). Bijas hold the vibrational/energetic power of particular deities.
GANAPATAYE: “unto Ganapati”
NAMAHA: “I bow to; I honor; I offer myself to”

So, this mantra can be translated as:

I offer myself to Ganesha, the Lord of beginnings and the remover of obstacles.

Mantras can be sung, spoken aloud, or repeated silently to oneself. It is helpful to use a mala (string of prayer beads) to count repetitions and help keep awareness on the mantra.

I want to emphasize that one does not need to believe in a literal deity in order to sing and benefit from mantra practice. There are many ways we can relate to the sacred Names. Some people find that the mythology, stories, and images associated with the various gods and goddesses help them connect with the Divine Energy by providing concrete forms. Others can better relate to the deities as representations of qualities or energies that are within us. So, as we chant to Ganesha, we are invoking the ability to embrace the new, and to clear away any stale energy, negative thinking, or unhealthy habits that have become hindrances to becoming our best self.

There are many recordings of chants to Ganesha. Some of my favorites are by MC Yogi, who creatively blends hip-hop rhythms with traditional Sanskrit chants, and cleverly weaves in the symbolism and mythology into a rap song with a danceable beat. Check out his songs “Elephant Power “ and “Ganesh is Fresh” (available on iTunes) if you want to learn more about and celebrate Ganesha in a fun way.

And, if I may toot my own horn a bit, here a link to a chant to Ganesha by my band, One Love:


May the coming year be a wonderful discovery, with just the right balance of joy and challenge, giving and receiving, solitude and companionship, activity and stillness. May we dance lightly with all those polarities, always returning to the peaceful center.  May your new beginnings be auspicious and your path be clear as you move in the direction of your dreams. Jai Ganesha!