If you have ever visited the Kripalu Center for Yoga and Health in the Berkshires, you know how fabulous and fun their movement classes are. Even if you have not actually participated in any of their world-renown dance classes, you have no doubt heard lots of wild hootin' and hollerin' and funky, evocative music wafting down the hallways from the main chapel every day at the noon hour. These classes have been a tradition at Kripalu for a decades. Originally called Dance Kinetics, these movement experiences were started by Megha Nancy Buttenheim, one of Kripalu's senior yoga instructors and a professional dancer. In later years, the name of the program was changed to Kripalu Yoga Dance. Eventually, other teachers began trademarking their own version of these dance classes--Journey Dance, Shake Your Soul, and more. In 2010 Megha trademarked the name "Let Your Yoga Dance" and has been training teachers all over the world to teach this uplifting and inspirational movement modality.

I recently completed my Let Your Yoga Dance teacher training, and I am very excited to beginning offering classes right here in Ithaca, New York! For the months of January and February I will be leading Let Your Yoga Dance at Island Fitness Community Corners, on alternate Thursdays, 11:15-12:15. It is FREE for members, and non members are welcome with an $11 day pass ($5.50 for downtown IHF members)

Let Your Yoga Dance® is a joy-filled fusion of gentle Kripalu yoga and user-friendly dance that is appropriate for all levels of fitness. In this inspiring and uplifting journey through the 7 chakras, or energy centers, we use breath, movement, and eclectic music to explore the multi-dimensional self. You do NOT need any previous yoga or dance experience to participate in this class. You only have to enjoy moving your body to great music from around the world, for fun, exercise, healing, and self-expression. Let Your Yoga Dance® is a total conditioning of body, heart, and soul! 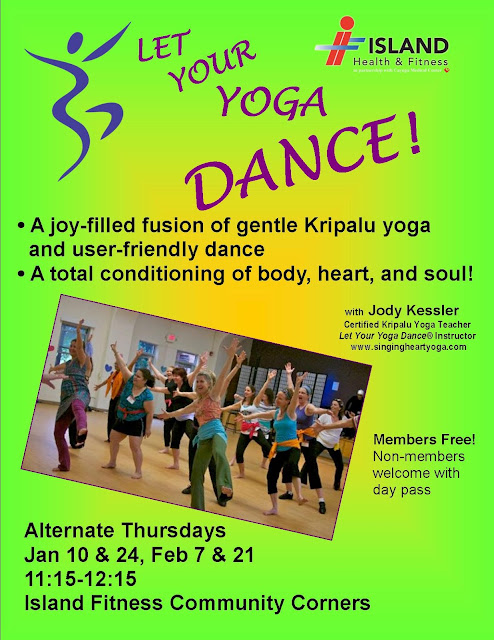 Posted by Jody Kessler at 2:54 PM No comments:

One Billion OMs for Peace

Any of us who’ve been around for a few decades have been told about special moments in time when the Earth is believed to be experiencing a powerful shift, creating a collective raising in consciousness, an awakening of humanity, or perhaps an apocalyptic prophesy. In the 60’s we heard about the dawning of the Age of Aquarius. In the 80’s there was the Harmonic Convergence. In 2000 we had the foreboding Y2K.

Now we are approaching the end of the Mayan Calendar, which will happen on this coming winter solstice, December 21, 2012.  Many are seeing this as the ending of life on the planet as we know it, and at the same time, the birth of a new era of consciousness.

Whether you believe this is true or new age hogwash, 12/21/12 gives us an opportunity to reflect upon what we want to let go of, and what we want to give birth to in ourselves.  Think about it as New Year’s Day expanded to exponential power, or like all your birthdays all rolled into one! Winter solstice on steroids!

But, even if December 22nd ends up being like every other day, we can usher in a shift in ourselves. As Mahatma Ghandi reminded us, it is our responsibility to be the change we want to see in the world. So we begin by setting intentions and making it a personal practice to live into them, one day at a time. The shift begins within.

I heard the following joke the other day:

Q: What will happen on Dec 22nd 2012?
A: There’ll be a bunch of Mayans frantically running around doing their Christmas shopping.

Okay, forgive me for digressing…

As part of a global movement honoring this auspicious time, you are invited to participate in OneBillion OMs for Peace, on December 22nd, at 12PM India Standard Time (that’s 1:30 AM Eastern Standard Time) for three minutes of continuous chanting this powerful mantra.  Imagine the power of one billion people (that’s one seventh of the earth’s population!) joining hearts, minds and voices simultaneously, with shared intention for peace and healing for our planet.

Even if it ends up being just a smattering of individuals in around the globe, it’s a beautiful and simple way to affirm your own intentions for this new era, and to proclaim your commitment to “being the change.” For three minutes, let’s raise the vibration of ourselves and our planet, and see what happens!

To learn more about why we chant OM, click here. To find out more about One Billion OMs, visit www.onebillionoms.com

Posted by Jody Kessler at 6:14 PM No comments: