The Nectar of Immortality 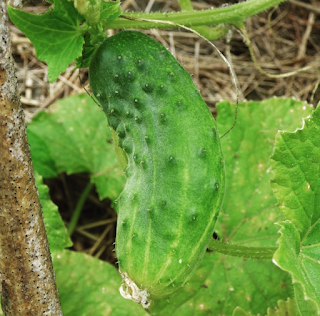 Recently I harvested the last of the cucumbers that grew so abundantly in my garden this summer. I also pulled the last of the withered tomato vines out of the ground, with gratitude for the bounty I had received.  As I did this clearing away of what was finished,  I was reminded of a beautiful prayer known as the Maha Mrityunjaya Mantra:

Here is basically what it means:

OM. We worship and adore you, O three-eyed one, O Shiva. You are sweet gladness, the fragrance of life, who nourishes all beings.  As, in due time, the cucumber ripens and is freed from the vine, may we be freed from attachment and fear of death, and realize the nectar of  immortality.

When we chant this mantra, we are essentially asking Shiva (the aspect of the Divine that transforms and liberates through dissolution) to show us who we are beyond this form, this body, this incarnation, and to help us to see that which does not disappear when the body dies, the essential Self that is infinite and eternal.

Shiva is the power of transformation and purification that lives in each of us. Shiva clears away whatever is old and no longer serves us. Shiva calls us to let go of illusion, to dissolve the egoic mind that keeps us stuck in our sense of separateness, and lovingly destroys all that keeps us from knowing our inherent divinity.

And, Shiva is also that state of Grace, that pure consciousness that is present when all illusion falls away. So, Shiva is both a process of transformation and the end result of that process.

Iconically, Shiva is represented in myriad ways. One common image is the Nataraj, or dancer, who dances wildly in a ring of fire, turning everything to dust. This fire dance symbolizes the circle of samasara, the earthly round of creation and destruction through which all beings pass. 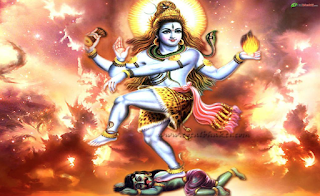 In addition to being the destroyer, Shiva is often depicted as a contemplative, who after witnessing the suffering of earthly beings, sought to find a way to peace and freedom.  This search led him into deep meditation, leading to the discovery of  the yoga asanas and other practices, which he then taught to his wife, Parvati. 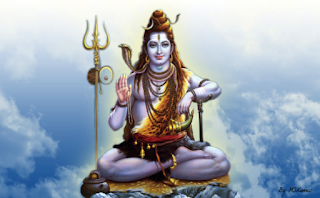 Shiva is also worshipped in the form of the lingam, a stone phallus. Elaborate pujas (devotional rituals) are performed in which the lingam is bathed in milk and honey, decorated with garlands of flowers, and smeared with fragrant sandalwood paste. The Shiva lingam represents the vast potential and possibility that lies within each and every one of us. So, although Shiva is responsible for destroying life, He is also recognized as an essential creative power. 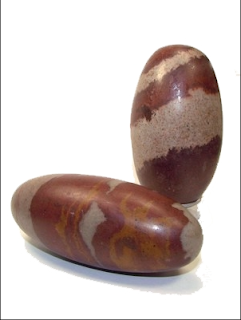 Autumn is a time when we can feel and see the presence of Shiva, as we witness the falling away of what is finished. In every leaf that falls, Shiva is present. With every ripe gourd that drops from the vine, Shiva is alive. 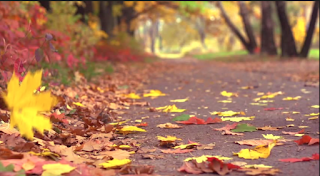 Shiva is present when we say goodbye to loved ones who have come to the end of their life in this body and must pass on.

Whenever we must let go of an old habit or some way of being that no longer serves us, Shiva is alive in us, doing his dance of transformation, clearing us out and creating an opening for the new to come streaming in.

And, Shiva lives in us as we practice yoga and meditation, as we seek to unleash our own innate transformative power, through this path to peace. May our practice allow us to taste the sweet nectar of immortality.

Posted by Jody Kessler at 6:49 PM No comments: 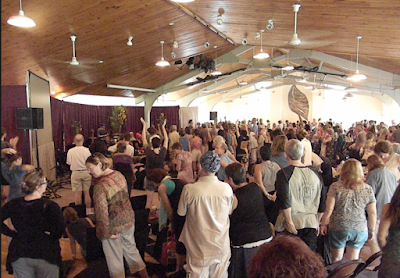 Thirteen years ago, I had a life-changing experience. In order to explain it fully, I need to go back even further than that, so I invite you to do a little time-traveling with me.

I see them only as another of the City’s many fringe cults. In my mind, I lump them into the same category as the “Moonies,” those dazed and confused young followers of Rev. Moon, or the “Purple People” who used to ride their bikes through the park, wearing only purple clothing. I watch with amusement as the Hare Krishnas dance and sing. I recognize the mantra as being “from” the Broadway musical Hair.

Fast forward 30 years. It’s Labor Day weekend 2004, and I am at Omega Institute in Rhinebeck, NY, at the very first annual Ecstatic Chant Festival. I signed up because chanting sounded fun. I find myself in a huge hall with 300 other people. An American Jewish guy from Long Island named Krishna Das gets on the stage and sits down at the harmonium (a small hand-pumped organ used in Indian music). He is not wearing orange robes, flowers, or bells. Instead, he has an unassuming outfit of jeans and a flannel shirt. He and his band begin to lead us in kirtan, Hindu call-and-response devotional chanting.

I feel waves of love welling up in me. Love for myself, for my partner, for everyone in that huge room, and for the Divine. My heart cracks open. Tears flow, and I finally understand, without being able to explain it rationally, what those Hare Krishna folks were up to.

My life has not been the same since that moment. Since then, I have made it a yearly pilgrimage to spend a weekend singing kirtan. Most years it has been at the Omega Institute for their Labor Day Extravaganza, although some years I flew out instead to the Bhakti Fest in Joshua Tree, California. And, in the summer of 2008, I had the pleasure of attending Jai Uttal’s week-long kirtan camp immersion in Marin County, California. This year, I will once again return to Omega for their Labor Day Weekend Ecstatic Chant Festival.

This is why I have become a kirtan leader today, and started the One Love band. This is also why I was inspired to become a yoga teacher.

What does all this have to do with yoga? Chanting is one of the main practices of Bhakti Yoga, the yoga of Love and devotion. Whereas hatha yoga tones and energize the body through postures and breath, bhakti yoga opens the heart . It is also a meditative practice, as the repetition of the Names and mantras focus and settle the mind. Ultimately, yoga is about becoming more fully alive and connected to Source. Chanting is one of the portals into that place where we touch into Spirit’s grace.

The practice of devotional chanting spans across and cultures, spiritual traditions, and millennia. There are two kinds of meditative practices that are found in the world’s religions:

The repetition of simple phrases or words helps us bypass the analytical mind, with all its judging, comparing, categorizing. Chanting invites us to go beyond the need to figure it all out, and simply drop into the spaciousness of the heart. Another way of saying this is that it helps us make a shift from living in the left brain to the right brain, which is the more holistic and intuitive hemisphere.

You may ask: what if I don’t believe in any God, Goddess, or Divine entity. How can I authentically participate in chanting the name of a deity that I don’t truly worship or have a connection with?

These names and forms are really qualities that live inside ourselves. Each mantra or Sacred Name is designed to invoke and cultivate qualities such as compassion, love, strength, courage, creativity, or to help us open to the grace of abundance and healing. All of these qualities and potentialities live as seeds within our being. Chanting is a practice of watering those seeds so that those qualities may blossom and bear fruit that we in turn, offer to the world.

The masters have taught us that we don’t even need to understand the meaning of the mantra or the Name in order to benefit from devotional chanting, because the chanting itself has an effect on the nervous system and the subtle energy body vibrationally. In particular, root languages such as Sanskrit and ancient Hebrew are said to have a powerful vibrational affect that is transformative. This is called Nada Yoga, the ancient yogic science of sound.

I personally have found chanting to be the most transcendental, the most powerful, the most direct path to union with Spirit. It doesn’t really matter which tradition or language the chant comes from, it all takes me to the same place.

I love the paradox that chanting the many Names and honoring the many Forms leads us to direct experience of what is Nameless and Formless.

So, whether you are new to the practice or a seasoned bhakta,  I invite you to let your analytical, rational mind take a little vacation, and open yourself to experiencing the power of chant. Let it be an adventure, an explorative journey into the wellspring of love, joy and bliss that dwells within your own heart.