There's a challenging yoga pose where one does a split, with one leg straight forward and the other extending straight behind. Arms are reaching skyward, and the chest and heart are open in a gesture of unwavering YES; it is as if one is leaping forward with trememdous power and courage. This posture is Hanumanasana, the pose of Hanuman, the Hindu monkey god.

Tuesday, April 15th is Hanuman Jayanti, the Hindu festival honoring the birthday of  Hanuman. So, I thought I'd share with you a little bit about this beloved character, and perhaps you'll be inspired to try the pose (or a more accessible, modified version, such as ardha Hanumanasana) in your practice this month!

Hanuman is worshiped as a symbol of physical strength, perseverance and devotion. In the epic tale known as the Ramayana, Hanuman is the servant of Lord Rama, and he demonstrates his unwavering and complete devotion to his Master with amazing feats of courage and strength. At one point in the story, Rama’s beloved wife Sita is abducted by the demon king Ravana, and she is held captive on the island of Lanka. Hanuman is given the task of crossing the ocean to find Sita. By the power of unwavering intention and loving service, he makes himself grow to a colossal size, and fixing his thoughts on the Divine Goddess Sita, he leaps across the ocean in a single bound. Lighting his tail on fire, he takes to the streets of Lanka and burns down the palace where Sita’s captor dwells.

After Rama and Sita are reunited, Hanuman is given a string of pearls as a token of appreciation. He immediately breaks the necklace and begins cracking each pearl open with his teeth. When asked why he is doing this,  Hanuman replies that he wants to see if Rama's name is present in the pearls. If it isn’t, then the necklace has no value to him. Sita then asks Hanuman if Rama is inside of him as well. At this point, the monkey god rips open his chest to reveal the name of Rama inscribed on every organ, muscle and bone, and the images of Sita and Rama are found on his heart.

The story of Hanuman’s strength and devotion are also depicted in the Hanuman Chalisa, a forty verse hymn written by 16th century Hindu saint and poet Tulsi Das. Many find great inspiration in singing these verses. In fact, there are many versions with different melodies by the kirtan artist Krishna Das. On his CD and book set Flow of Grace, Krishna Das sings the chalisa and provides instruction, interpretation and proper Hindi pronunciation for those who wish to learn to sing this beautiful hymn.

The Hanuman Chalisa is chanted specifically to clean the mirror of our hearts so we can come into direct contact with the grace of Hanuman. His river of grace flows into our nearly dried-up stream and fills it with the water of life, awakening us to the awareness of Ram's (God's) presence within. This is when our hearts truly come alive. Once the waters of two rivers mingle, they can never be separated.   ~Krishna Das, in Flow of Grace

Hanuman inspires us to find strength within ourselves we might never have known we had. He is an example of discovering our forgotten potency. It wasn’t until he took that giant leap across the ocean that he became aware of his own strength. It was something he had never done before--it was a “leap of faith.” But because his whole heart and mind were directed toward loving and serving God, this hidden potency emerged and empowered him. It is said that the word impossible is not a word in a devotee’s dictionary.

So, I invite you to reflect on an area of your life where you can offer your unwavering service and devotion. What calls you forth to summon your inner strength and courage? Can you take that leap of faith? 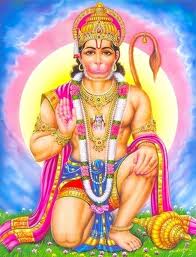 Hanuman, bestow your grace upon us,
Divine Guru
O, Son of the Wind, reliever of suffering,
embodiment of blessings,
live always in our hearts.
~Hanuman Chalisa