Honoring the Sun with Movement, Mantra and Breath

As we approach the Winter Solstice, we in the Northern Hemisphere are experiencing a time of increasing darkness. On December 21st, the Longest Night, the diminishing daylight reaches its peak, and the sun begins its gradual ascent back to the balance of Spring Equinox, returning to fullness on the Longest Day, Summer Solstice.

The practice of Surya Namaskar, or Salutation to the Sun, offers us a way to honor the sun's journey, to reflect on the many gifts that we receive from the sun, and to welcome its return to fullness.  It is a meditation-in-motion that draws upon the qualities of our own divine light, connecting with the radiance of our true Self.  This is a practice which is both contemplative and physical, toning and strengthening our muscles, nourishing our internal organs, awakening the energy body with prana, and cultivating a sense of devotion and gratitude.

Our practice begins by tuning in to the breath. Just as the sun moves from emptiness to fullness as it circles from Solstice to Solstice, and rises and sets from day into night, so moves our breath--filling, emptying, filling again in this continual, life-sustaining rhythm. If we add a short retention at the top of the inhale and at the bottom of the exhale, we mirror the pause of the sun at the Winter and Summer Solstices (the word "solstice" comes from the Latin sol, meaning "sun," and stitium, which means "to pause or stop." The sun appears to linger for a while at the peak of long, light-filled days in Summer, or in the very short, dark days of Winter, before we can perceive a slow shift in the length of the days). So as we turn our attention to our breath, inviting in a pause in fullness and in emptiness, we still the mind and calm the nervous system, while honoring the rhythm of life.

While taking a few minutes to breathe deeply,  try bringing the hands into Surya Mudra (the mudra of the sun), which increases the fire (Agni) element in the body. This mudra creates warmth, preparing us mentally, physically and energetically for Surya Namaskar. 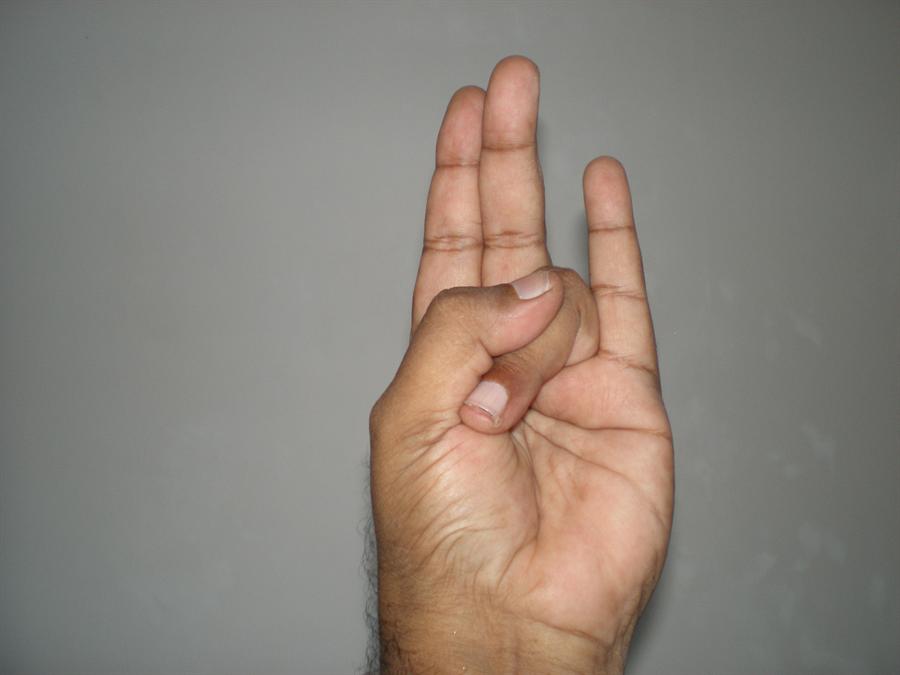 The twelve sun mantras
Every year the sun passes through twelve different phases,  known in Western astrology as the Zodiac,, and 'rashis' in Hindu astrology.  Each rashi has a specific attribute or mood, and in each of these twelve moods the sun is given a different name. These twelve names comprise the twelve Vedic sun mantras, which are to be mentally repeated in their respective order in conjunction with the twelve movements of surya namaskara.

These sun mantras are not merely names of the sun, but every sound syllable contained in them is the vehicle of a basic, eternal energy (shakti) represented by the sun itself. By repetition and concentration on these mantras, one's entire mental and subtle body will be energized.

Although these mantras do not require intellectual understanding, translation of their meaning is given below for those who wish to use the mantras as a form of attunement with the source of spiritual illumination symbolized by the sun.

Here is the sequence of twelve postures of Surya Namaskar, with the associated mantras:

1. Om Mitraya Namaha
(Salutations to the friend of all)
Pranamasana: standing with palms joined at the heart center
This first position embodies the attitude of reverence to the source of all life as we know it. The sun is regarded as the universal friend, endlessly giving light, heat and energy to support this and all the other planets. In the scriptures, Mitra is described as calling us to activity, sustaining earth and sky, and beholding all creatures without discrimination, just as the early morning sun signals the beginning of the day's activities, and sheds its light on all life.

2. Om Ravaye Namaha
(Salutations to the shining one)
Hasta Uttanasana: hands raised to the sky, slightly bending backwards (if comfortable)
Ravaye means one who shines and offers divine blessings upon all life. In this position, we are stretching our whole being upwards, towards the source of light, to receive these blessings.

3. Om Suryqya Namaha
Uttanasana: Standing forward bend, hands to the floor
(Salutations to the one who induces activity)
Here the sun is in a very dynamic aspect as the deity, Surya. In ancient vedic mythology Surya was worshipped as the Lord of the Heavens, pictured crossing the sky in his fiery chariot, drawn by seven horses.  The seven horses actually represent the seven rays or emanations of the supreme consciousness, which manifest as the seven planes of existence, bhu (earthly, material), bhuvar (intermediate, astral), suwar (subtle, heavenly), mahar (the abode of the devas), janah (the abode of divine souls who have transcended ego), tapah (the abode of enlightened siddhas) and satyam (the ultimate truth of reality). Surya symbolizes the supreme consciousness itself, in control of all these different planes of manifestation.

4. Om Bhanave Namaha
(Salutations to the one who illumines)
Ashwa Sanchalanasana: Low lunge, back knee rests on mat. fingertips to the floor
The sun is the physical representation of the guru or teacher, who removes the darkness of our delusions, just as the darkness of the night is removed with every dawn. In this position, we turn our face towards this illumination and pray for an end to the dark night of ignorance.

5. Om Khagaya Namaha
(Salutations to the one who moves through the sky)
Plank pose: shoulders over wrists, arms and legs straight, body in one line.
It is the sun's daily movement through the sky which is the basis of our measurement of time, from the earliest use of a sun dial to the sophisticated devices used today. In this posture, we offer obeisance to the one by whom time is measured, and pray for progress in life.

6. Om Pushne Namaha
(Salutations to the giver of strength and nourishment )
Ashtanga Namaskar: knees, chest, chin, hands and balls of feet touch the floor, buttocks raised.
The sun is the source of all strength, nourishing us with energy, light and life. We offer respects in ashtanga namaskara by touching all the eight corners of our body to the ground. In essence we are offering our whole being in the hope that the sun may bestow mental, physical and spiritual strength and nourishment upon us.

7. Om Hiranya Garbhaya Namaha
(Salutations to the golden cosmic self)
Bujangasana: Cobra pose--palms down, under shoulders, chest and torso raised, with elbows bent.
Hiranya Garbha is also known as the golden egg, resplendent as the sun, in which Brahma was born as the manifestation of Self-existence. Hiranya Garbha is the seed of causality, thus the whole universe is contained within Hiranya Garbha in the potential state prior to manifestation. In the same way, all life is potential in the sun, which represents the great cosmic principle. We offer respects to the sun in this position, praying for the awakening of creativity.

8. Om Marichaye Namaha
(Salutations to the rays of the sun)
Adho Mukha Svanasana: Downward-facing dog. Inverted V, hips high, hands and feet flat.
Maricha is one of Brahma's sons, just as the rays of light are produced from the sun, but his name also means mirage. For our whole life, we seek after a true meaning or purpose, like the thirsty man seeks after water in a desert, but is fooled by mirages dancing on the horizon produced by the sun's rays. In this position, we pray for true illumination and discrimination in order to be able to distinguish between the real and the unreal.

9. Om Adityaya Namaha
(Salutations to the son of Aditi)
Ashwa Sanchalanasana: Low lunge (whichever leg stepped back now comes forward).
Aditi is one of the many names given to the cosmic mother, Mahashakti. She is the mother of all the gods, boundless and inexhaustible, the creative power from which all divisions of power proceed. The sun is one of her children, or manifestations. In this position, we salute Aditi, the infinite cosmic mother.

10. Om Savitre Namaha
(Salutations to the stimulating power of the sun)
Uttanasana: Standing forward bend, hands to the floor
Savitre is known as the stimulator, the arouser, and is often associated with Surya.  Savitre is said to represent the sun before rising, stimulating and arousing us into waking activity, and Surya is said to represent the sun after sunrise, when activity begins. Therefore, in this position, we salute Savitre to obtain the vivifying power of the sun.

11. Om Arkaya Namaha
(Salutations to the one who is fit to be praised)
Hasta Uttanasana: hands raised to the sky, slightly bending backwards
Arka means energy. The sun is the source of most of the energy in the world we know. In this position, we are offering respects to this source of life and energy.

12. Om Bhaskaraya Namaha
(Salutations to the one who leads to enlightenment)
Pranamasana: standing with palms joined at the heart center

In this final salutation we offer respects to the sun as a symbol of the great revealer of all transcendental and spiritual truths. It lights up the pathway leading to our ultimate goal of liberation. In this position, we pray that this pathway may be revealed to us.

Finally, we can end our practice in Savasana, noticing the enlivening effects of Surya Namaskar.

Note: The above interpretation of the sun mantras is referenced from the book “Surya Namaskara” from the Bihar School of Yoga.

Listen and practice along with this 16 minute recording:

Posted by Jody Kessler at 3:37 PM No comments: